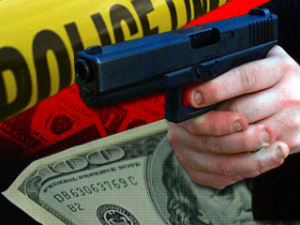 Taking something you have no legal right to is a crime, but using a weapon or threatening to use one, magnifies the problems you face. A deadly weapon such as a knife or gun is a serious matter to police and the courts. Hold-ups, car-jacking, bank robbery and purse-snatching are cases that can be charged as armed robbery. Contact Law Offices of Jesus R. Lopez, armed robbery defense attorney.

Identification
An armed robber generally flees the scene, and police later identify a defendant via a witness viewing a photo array or lineup. These may be prejudicial means, if not done fairly. We may be able to attack the evidence and have it thrown out.
Even if a witness is allowed to identify the defendant, we know witnesses are often mistaken. Two people may look alike, the weather or lighting can call into question a witness’ accuracy. There may even be a dishonest basis for the accusation. A witness may have been involved, or the actual perpetrator. It is not unheard of for a witness to testify as part of their own criminal plea deal.

Penalties
Aside from prosecution and possible prison time, armed robbery is a felony and conviction on a felony can hinder you for years to come. Your voting rights may be restricted, and you could have trouble renting an apartment or getting a job.